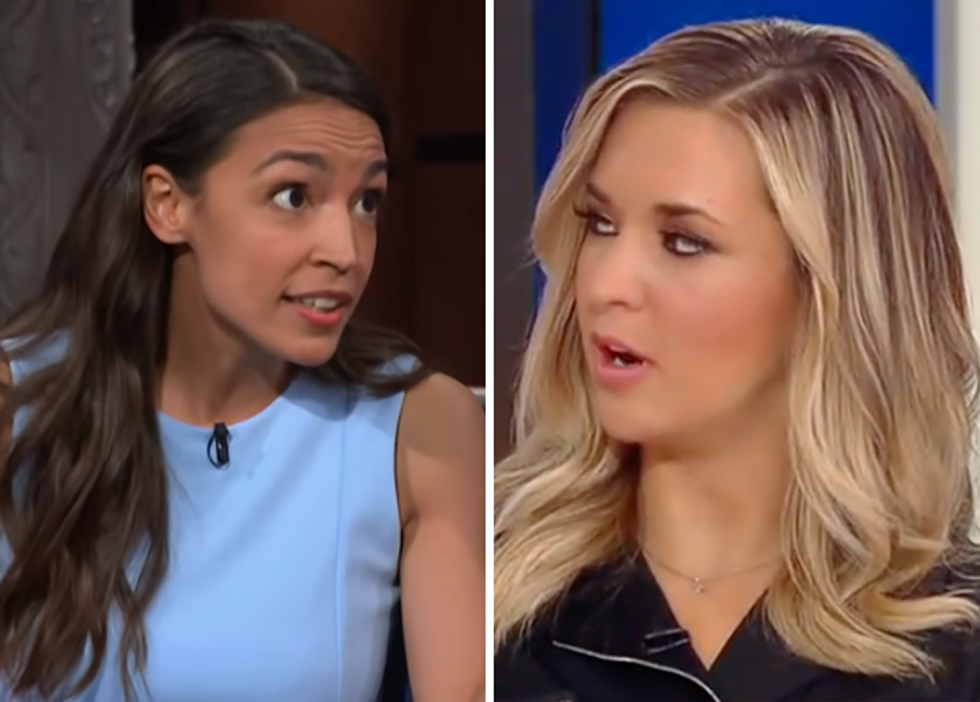 Democratic congressional nominee Alexandria Ocasio-Cortez, who is running against Republican Anthony Pappas for the seat that Rep. Joe Crowley presently holds in the U.S. House of Representatives, recently barred the press from two town hall events in New York City—explaining, on Twitter, that she did so because she wanted victims of domestic violence to “feel safe discussing sensitive issues in a threatening political time.” But when Fox News contributor Katie Pavlich discussed the town halls on the program “Outnumbered,” she claimed that Ocasio-Cortez had another motivation: protecting illegal immigrants.

Appearing on a panel alongside “Outnumbered” host Melissa Francis, Charles Payne and libertarian Lisa Kennedy Montgomery, Pavlich asserted, “(Ocasio-Cortez) says 50 percent of the community are immigrants. But at the same time, she doesn’t want to let anyone in to meet who these people are—which signals to me they are illegal immigrants and they are harboring them, and they don’t want the press to expose they are here illegally.”

Francis interjected, “No, that’s what she wants you to say. That’s the trap you’re falling into.”

The panel was uniformly critical of Ocasio-Cortez, with Francis and Payne both insisting that she was afraid of the press. Payne asserted, “It’s so cheap (and) tawdry to say, ‘I’m trying to protect victims of abuse’ because she can’t stand up to the press.” And Montgomery asserted, “You can’t say that (an event) is open to the public and not allow the press inside. That’s not open to the public.”

On June 26, the 28-year-old Ocasio-Cortez (a member of the Democratic Socialists of America) sent shock waves through the political world when she defeated ten-term Rep. Crowley in a Democratic congressional primary in Queens and the Bronx. It was a landslide victory: Ocasio-Cortez won 57% of the vote, and she goes into the general election with an advantage given how overwhelmingly Democratic her district is.

Pappas is surprisingly moderate by modern GOP standards. The Queens-based Republican (a professor of economics at St. John’s University in Jamaica, Queens) has spoken out against mass incarceration and the Prison/Industrial Complex, favors tougher enforcement of anti-trust laws for large corporations, and is not a climate change denier.

In other words: because Pappas isn’t a raving lunatic, he is someone Fox News would ordinarily characterize as a “RINO” (Republican in name only) if they weren’t so obsessed with demonizing Ocasio-Cortez.