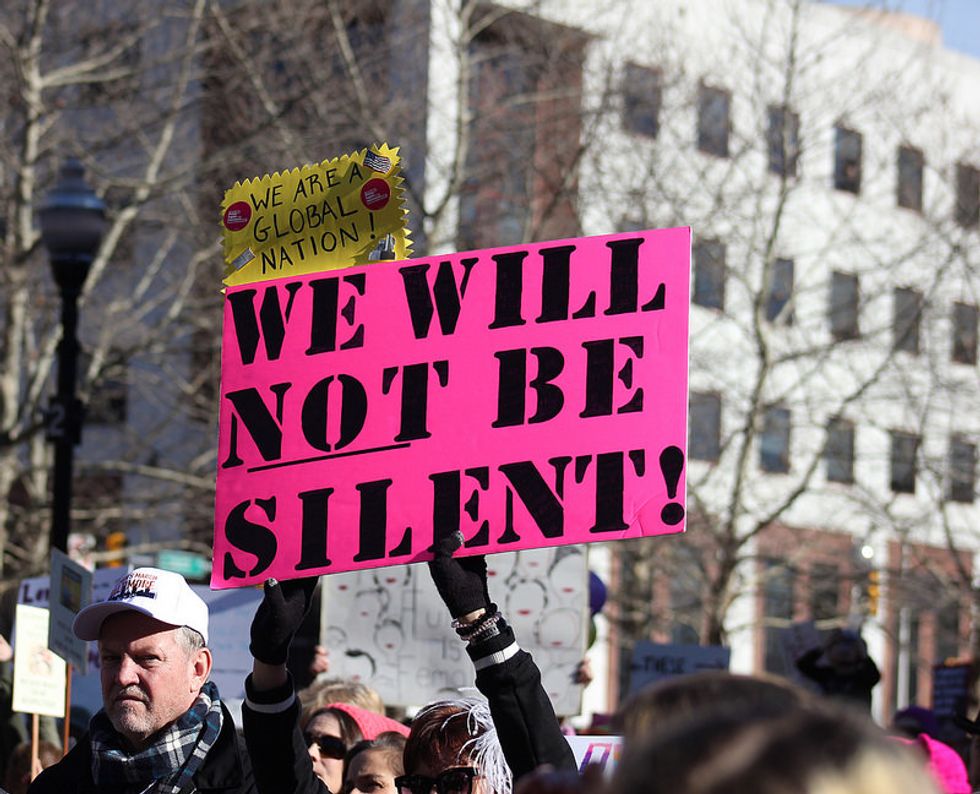 We’re in the midst of an unprecedented social, political and environmental crisis that will require us to change everything. Including the one thing we won’t discuss: war.

War is the weaponization of discrimination, classism and misogyny. So why are so few women talking about it?

We talk about #MeToo and the first time (or worst time) it happened to us. We put on our pussyhats and resist and persist and insist. But the resistance that rose up in opposition to the Trump administration does not resist war, and anti-war messaging is still missing from the Women’s March. While virtually every women’s television talk show and radio program in the country now talks about politics on a daily basis, they’re still not talking about the politics of war. We’ve been told that war isn’t our concern. That was a lie, ladies. Foreign policy is a feminist issue.

Domestic abuse your cause? Let’s talk about how wives of combat vets with PTSD are more likely to be killed by their spouses than any other demographic. Or how traumatized combat vets are responsible for 21 percent of domestic violence nationwide, according to a Yale study.

Got a problem with gun violence and assault weapons in schools? Let’s discuss the way weapons of war are coming home and how many United States gun manufacturers are also military contractors.

Concerned about climate change? The U.S. military uses more fossil fuels than the majority of nations, and the billions of dollars wasted on the Iraq war could have converted the whole planet to green energy.

Women are leading the way to protect our water and create a mass climate mobilization that responds to our ecological crisis like the existential emergency it is. Why then are we still so silent about how the war on women is the war on the world? Why so silent about America’s de facto foreign policy of using armed force to safeguard the capitalism that is destabilizing the climate? Why so silent about the fact that women—particularly women of color, women living in poverty and marginalized women—disproportionately bear the burden of war and the violence it begets?

When #WomenDisobey and righteously demand an end to putting immigrant children in detention centers, we also should demand an end to military contractors like General Dynamics and MVM, Inc., which are profiting from those centers. And making money on the misery this country creates for children overseas.

We can talk about intersectionality and proclaim "gender justice is racial justice is economic justice," as Women’s March organizers did in their powerful Unity Principles. But economic justice is a fiscal impossibility when defense-related spending accounts for slightly more than two-thirds of the national budget. This country puts more money into the military than the next 10 nations combined while tens of millions of women and children living in poverty struggle to survive. In fact, war spending makes social inequality worse, according to a June 2018 report by the Costs of War project at Brown University. An analysis of past and present wars since 1812 "suggests that the current combination of domestic borrowing to pay for war, accompanied by continuous tax cuts, have led and will continue to lead to rising social inequality in the US."

There will be no justice without peace.

Legitimate racial justice cannot be achieved while we are bombing brown people abroad and up-armoring a militarized police force that too often puts bullets in black Americans.

For as long as men are making the decisions about war and women are bearing the brunt on the war front and the burden on the home front, we will not realize gender justice. We won’t get there until we have a foreign policy that is feminist, too.

A feminist foreign policy would hold the long-term prevention of violence and armed conflict as its main goal. According to Professor Jacqui True, author of "The Political Economy of Violence Against Women," that policy would identify and address economic inequality and other "underlying gendered globalized structures … that contribute to violence and conflict." That policy "must link demilitarization and disarmament to investment in people-centered development and justice."

Feminist foreign policy is the worldwide integration of the Unity Principles and the paradigm for a peace where justice can be born. It is the ideological foundation to build a movement to divest from the war machine. Because a feminist foreign policy is not just about the common good—it’s about the global good. It is capable of deconstructing the baseline of violence upon which this nation was founded, violence that is holding us and much of the world hostage to a white patriarchal consumer culture funded and fueled by an extractive war economy.

The feminine force rising around the world has had enough of that.

So, ladies, let’s end our silence about America’s endless wars, and start talking about peace as if justice depends on it. Because it does. The thing we’ve been avoiding is the one thing—perhaps the only thing—that will change everything.