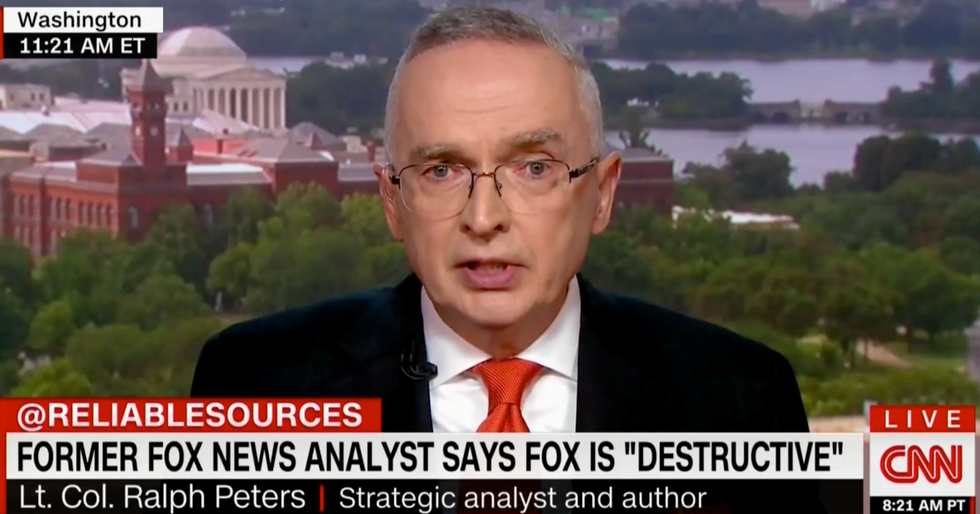 Retired United States Army Lt. Col. Ralph Peters on Sunday unloaded on his former Fox News colleagues, arguing they serve Donald Trump with such blind faith that they “constitute a threat to our republic.”

Peters, who left Fox News in March with a scathing op-ed about the network’s pro-Trump slant, told CNN’s Brian Stelter he’s doing his “part in these dreadful, dreadful days in Washington.”

“What is the most dreadful part about it for you?” Shelter asked.

Peters, a former Russia analyst, added he’s “convinced that the President of the United States is enthralled to Vladimir Putin.”

“There is no other way to explain his behavior,” Peters claimed. “And he perfectly fits the profile of the kind of people the Russians target.”

“This is a distinctly un-American president who really doesn’t seem to like America very much, certainly doesn’t respect it,” Peters added. “And he’s a president who appears to be enthralled to a foreign power, a hostile foreign power. This is unbelievable to me. I could never have foreseen this. I was a pretty good analyst, made a lot more good calls than bad calls. I never could have foreseen this, to use a cliched word, this Orwellian situation.”

Asked if his sharp criticism of the president “has the opposite effect of your intent,” Peters replied he “doesn’t worry” about calculating his words.

“What we need is people who will speak honestly and say what they believe and not worry about who it offends. I’m just sick and tired of people hedging and hemming and hawing. This is a President of the United States who is a danger to the republic,“ Peters said. “Brian, the only reason I am here today on this show or any show isn’t because I’m enamored with the chance to be on television. It’s because we all need to do our part. These are parlous times. It is not hyperbole to say this man and his henchmen and henchwomen constitute a threat to our republic.”

Turning to why he left Fox News, Peters said he left “because as a former military officer who took an oath to the Constitution, I could not be part of a channel that to me was assaulting the Constitution, the constitutional order, the rule of law.”

“But that said, Fox isn’t immoral, it’s amoral,” Peters continued. “It was opportunistic. Trump was a gift to Fox and Fox in turn is a gift to Trump. As you observed earlier, it’s a closed loop. And so people that only listen to Fox have an utterly skewed view of reality.

Stelter later asked if Peters thinks his former Fox News colleagues are proud of their performance.

“The polite word is ‘Prostitutes,’ so we’ll just leave it at that,” he said. “I don’t want to be the go-to guy for fox-bashing forever. But what Fox is doing is causing real harm to our country right now.”