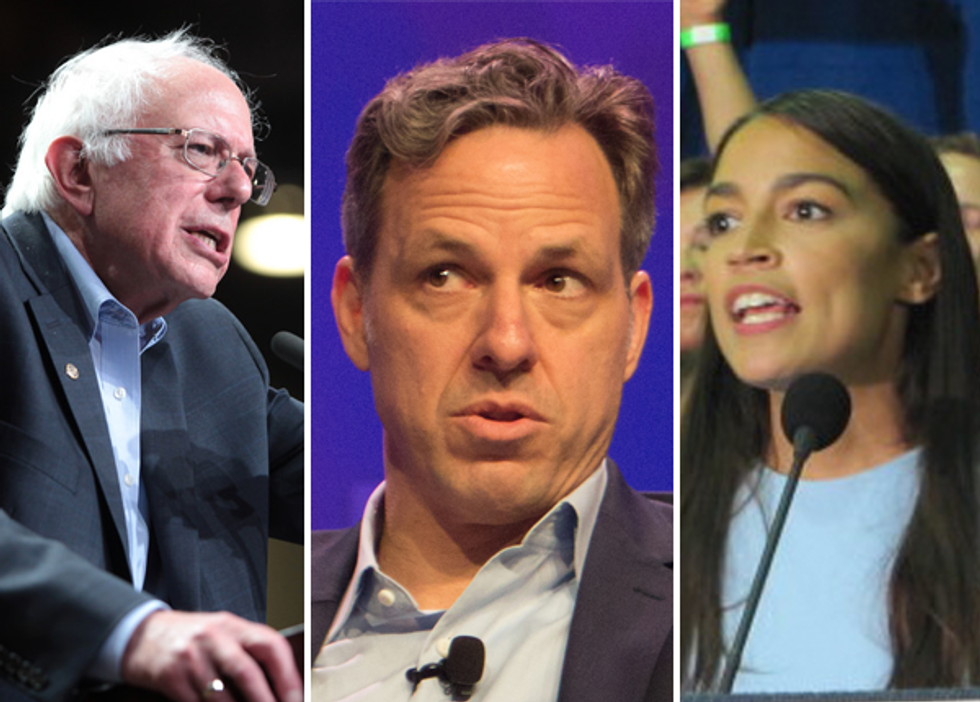 After nearly three days of constant pressure, clear explanations of basic facts, and bit of healthy shaming, CNN's Jake Tapper on Sunday finally relented to the sheer force of the evidence and admitted that his Medicare for All "fact check"—which aimed to discredit Sen. Bernie Sanders' (I-Vt.) claim that a Koch brothers-funded study showed single-payer would save Americans $2 trillion—was horribly misleading and is in need of a substantial "redo."

@BenSpielberg @ryangrim Yes, the point made about the “American people” versus “the government” is on point and totally valid so we’re going to redo that part of the video.

The central falsehood of Tapper's video segment, which he has now promised to correct, was his conflation of the American people and the U.S. government.

Sanders, New York congressional candidate Alexandria Ocasio-Cortez, and several policy analysts have pointed out that—according to the Koch-funded Mercatus Center study, authored by Chuck Blahous—the American public would save $2 trillion on healthcare under Sanders' Medicare for All plan.

Apparently confused by the difference, Tapper declared in his segment: "Is that true? Did a study funded by the Koch brothers indicate that Medicare for All would actually save the U.S. government[emphasis added] trillions of dollars? No."

Numerous commentators proceeded to point out the error:

Jake, you cannot claim that Bernie said "the government" would save $2 trillion. He did not say that, instead he said americans would over all save $2 trillion. Look at the video clip of Bernie again. This is undeniably a false representation of Bernie's claim. Straight up.

Not to pile on, but everything hinges on whether Sanders and Ocasio-Cortez said that the study found M4A would save "the government $2 trillion." I've never seen Sanders or AOC make that claim. It's about overall costs.

While Tapper's concession on Sunday that these criticisms of his segment are "totally valid" was welcomed, several observers noted that his fundamentally incorrect video has already reached a large audience and argued that Tapper must issue a full correction and broadcast an entirely new segment.

Good for @jaketapper for doing this. But having now acknowledged the need for two corrections, he should consider whether he and the other people working on this understand the issue of Medicare for All well enough to appoint themselves as fact checkers. https://t.co/SF9uzNcKJs

Even with this corrected, the segment by @jaketapper will still be wrong and misleading. Which is too bad, because the Mercatus study and Sanders's statement about it is a good opportunity to help people understand the issue. https://t.co/SF9uzNcKJs

Correcting ‘that part of the video’ will not be sufficient. ie: how many people did you reach with the original broadcast and subsequent viewings vs how many will see your ‘posted correction’? You did a lot of damage. You must undo that damage. Do a new segment. Live.

In an article on Monday, People's Policy Project founder Matt Bruenig—who was the first to point out that the Koch-funded study projected $2 trillion in healthcare savings—argued that Tapper's misleading video is indicative of the broader problem of fact checkers not actually understanding the issue they're analyzing, making them vulnerable to the manipulative claims of corporate-funded right-wing institutions like the Mercatus Center.

"To determine whether the study says what Sanders says, you need to read it and independently judge that. If you are not capable of doing that, which most journalists aren't due to the complexity of the matter, then you need to talk to a lot of people from different sides who have read the report and have the skills necessary to describe it to you," Bruenig writes. "Instead, journalists like Tapper have decided to only ask [the Mercatus Center's] Blahous, who has an incentive to deceive people, what the report says rather than asking neutral experts or experts from different political persuasions to describe the report."

As an egregious example of this phenomenon, Bruenig cites yet another falsehood-riddled Medicare for All fact-check by the Washington Post's Glenn Kessler, who—according to Sanders policy director Warren Gunnels—didn't even contact Sanders' office prior to publishing his analysis, choosing to rely solely on Blahous.

"This is the kind of nonsense we are dealing with here. Tribal affiliations are getting in the way of basic presentations of facts and figures," Bruenig concludes. "The centrist and liberal media brand themselves as truth-tellers, but that's all it is: a brand. When the truth goes agains their tribe or ideological priors, they become just as bad as Fox News."