Children's Books Are Making the Gender Problem in Science Even Worse 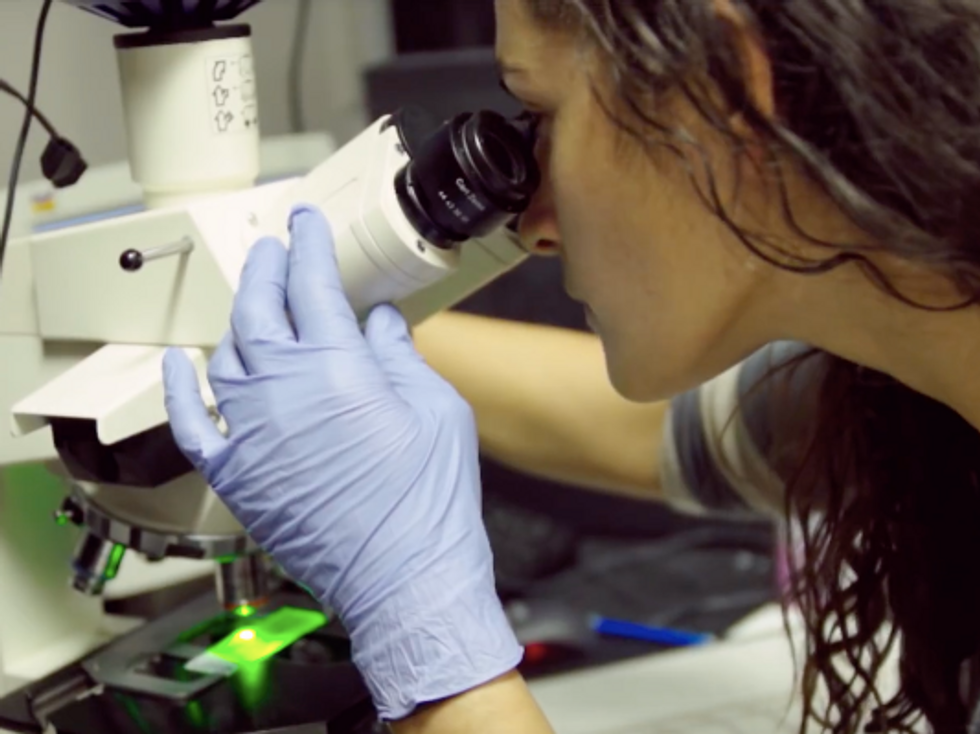 Ask young children what they want to be when they grow up and the chances are that scientific jobs such as astronaut and doctor will appear high on the list. But ask them to draw a scientist and they are more than twice as likely to draw a man than a woman. Children can form these kinds of biases from many sources. But perhaps we shouldnâ€™t be too surprised to see such an absence of women scientists in childrenâ€™s drawings when the illustrations we show them are often just as bad.

[Our study of imagery in childrenâ€™s science books reveals that women are significantly underrepresented. In the physical sciences in particular, the pictures frequently fail to communicate womenâ€™s technical skills or knowledge. The imagery in these books gives the impression that science is a subject for men, and that careers in science, technology, engineering and maths (STEM) are unrewarding for women.

Developmental theories explain that children learn gender expectations to help them to respond appropriately within their social environment. This influences their understanding of who they are and encourages them to behave in a way that is conventional for their gender.

Pictures of men and women in childrenâ€™s science books contribute to these expectations by teaching them â€œrulesâ€ about the occupations suited to each gender. This encourages them to conform to prevailing gender career stereotypes. To counter this, female role models need to be visible in books to help develop girlsâ€™ interest in science as they get older, and overcome negative perceptions of female scientists

Where are all the women?

Our research analysed the childrenâ€™s science picture books in two public libraries in England. First we counted the frequency of images of men, women, boys and girls within the 160 available books. Then we did a detailed visual analysis of two scientific professions: astronauts and doctors. In this subset of 26 books, we examined what the male and female astronauts and doctors were doing, wearing and holding in the pictures.

We found that, overall, childrenâ€™s science books pictured males three times more often than females, reinforcing the stereotype that science is a manâ€™s pursuit. The under-representation of females only worsened as the target age of the book increased. The women were generally depicted as passive, lower status and unskilled â€“ or their presence was not acknowledged at all.

For example, one childrenâ€™s book about space exploration shows whatâ€™s involved in a spacewalk. Along with pictures of astronauts in their white padded spacesuits, we are told: â€œWithout a spacesuit an astronautâ€™s blood would boil and his body would blow apart.â€ The use of male pronouns suggests the person inside the spacesuits is male.

There is no mention of the 11 courageous women who have performed spacewalks, including astronaut Sunita Williams whose image is used in the montage. As Williamsâ€™s face is covered by her helmet and the text only mentions men, it would be easy for children to think that women donâ€™t do spacewalks.

On the pages of another book, we do see a female astronaut, pictured floating inside a space station and smiling at the camera. The qualifications and experience required to get astronauts to this point are extensive. Places on NASAâ€™s Astronaut training programme are highly competitive with thousands of applications each year. But in the book, the womanâ€™s training, expertise and knowledge are not mentioned.

Instead, the picture caption reads: â€œIn zero G, every day is a bad hair day.â€ Comments like this that focus on womenâ€™s looks fail to take their contributions seriously. Whatâ€™s more, research shows that emphasising appearance in science role models can reduce school girlsâ€™ self-rated ability or make scientific jobs seem unobtainable to them.

Our study also found important differences between subject disciplines. In physics books, 87% of images were of men or boys, and in the few pictures where female astronauts were pictured, they were never shown driving shuttles, doing experiments or spacewalking. Books about biology, in contrast, did have an even balance of images of men and women â€“ and female doctors are shown carrying out the same activities and having the same status as male doctors.

You might think that imagery isnâ€™t important, that the messages in pictures or illustrations are trivial. A multi-billion pound advertising industry disagrees with you. Advertising rarely provides detailed arguments for products or services but this doesnâ€™t make its messages less powerful. Instead, adverts rely on persuasion through peripheral cues, such as by exemplifying appealing lifestyles and using imagery depicting the rewards of status or respect.

In the same way, childrenâ€™s books advertise career choices, and their imagery communicates what it means for men and women to be associated with these occupations. Women need to be present in childrenâ€™s science books to demonstrate that all science subjects are fulfilling for girls.

Research shows that, even before children go to school, they have the idea that men are better at male-dominated professions. Given that girls as young as eight are often put off maths and science by teachers and parents, it is perhaps no surprise that only 20% of A-level students taking physics are female. Interviews with successful female scientists have shown that girls do seek out role models in science, but are often unable to find them.

As such, itâ€™s vital that imagery in childrenâ€™s books is given greater consideration. Book editors and illustrators need to make significant efforts to represent women as qualified, skillful and technically able. They need to be pictured actively engaging in scientific activities and using appropriate tools or equipment, not merely present as assistants or observers. Women also need to be represented in greater numbers so that girls can see female role models in STEM professions and see these careers as potentially rewarding.

Parents, teachers and librarians â€“ along with authors, illustrators and publishers â€“ should review their books for gendered messages. Question what the images are teaching children and ask what career aspirations the books might be igniting or quashing.