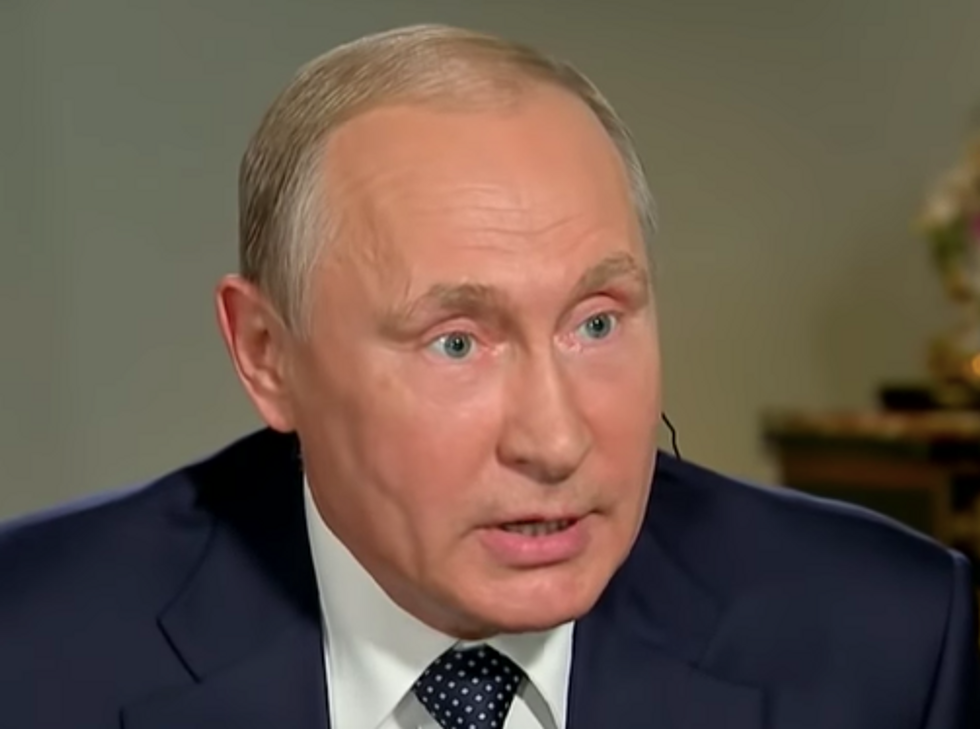 During this year’s 26th annual DEFCON convention, a massive event organized by and for hackers, an 11-year-old girl was able to successfully hack into a ES&S M650 Optical Scan Tabulator, the machine used in Florida elections to tabulate votes, in just 10 minutes. Yeah. Sleep tight, America. Anyone who believes the Russians aren’t trying -- and succeeding -- to do the same in real life is lying to themselves. That includes the president.

Several weeks ago, Donald Trump was asked whether Russian military intelligence operatives working on orders from Vladimir Putin were still engaged in a cyber-war against the United States, specifically our elections and our national sovereignty.

Trump replied, “Thank you very much, no.”

Vega followed up: “No? You don’t believe that to be the case?”

The president was, of course, lying. Having heard first-hand from the people he hand-picked to run America’s intelligence community, who all agree that Russia continues to attack us, Trump continues to deny it in public. Imagine George W. Bush telling reporters, after wrapping up his reading of "My Pet Goat," that terrorists weren’t attacking us, even while the World Trade Center towers crumbled and the Pentagon burned. The absurdity of Trump’s lie can only be matched by the absurdity of his myriad other lies.

How do we know Trump is lying? Besides the fact that he’s saying words and those words usually form a lie, we know he’s lying because we can see elements of the attack happening in real time. The crisis continues. The most unsettling aspect of the attack is that it could easily change vote totals in favor of Vladimir Putin’s favorite president, and could do so in ways so subtle as to escape suspicion. We’ll circle back to this.

Meanwhile, it helps to familiarize ourselves with the various fronts of the current attack -- the fronts that we know about.

Yes, it’s good news that Facebook and others are weeding out the Russian combatants. But are we doing enough to thwart Putin’s overall strategy for the 2018 midterms? It’s nearly impossible to know, without access to classified reports, whether Russian agents continue to amplify politically divisive stories online. It's especially difficult to know whether infiltrations from previous years remain operational, perched in stand-by mode. However, the effort to stop Putin this year could drive the attackers to employ more subtlety.

All it might take to alter important results in November would be modest changes in vote totals in a small number of districts. Hackers don’t need to pursue electronic voting machines in order to do that. They can add a single line of code in centralized election databases and tabulation machines like the one that was hacked at DEFCON, siphoning a few votes here and there away from Democrats and toward Republicans. Think of a hack similar to the one used in Mike Judge’s “Office Space” -- one that operates quietly and unnoticeably, moving small chunks of votes from one column to another, but easily enough to swing nail-biting elections like the one we observed last week in Ohio's 12th congressional district. What happens then?

While, sure, it’s possible everything will go smoothly, it makes sense to prepare ourselves for a series of races on the evening of Nov. 6 to be “too close to call,” and which then lean Republican in the end. The closeness will dissuade the press from asking questions, and will surely make it more difficult for activists to point to Russian and/or Republican shenanigans. We also know that outsiders can easily rig the vote by eliminating voter registration data, striking Democrats in key districts off the voter rolls.

Usually, the president is tasked with leading and supervising the executive branch as it safeguards the nation and our Constitution. Today, however, the president and many senior officials from his party, including Republican members of Congress, are in league with the enemy. Therefore law enforcement and intelligence agents under Trump have no choice but (we hope) to proceed independently of their commander in chief, who still claims to believe this is all a hoax.

When these attacks are stopped, it’s only because of the goodwill, sense of duty and patriotism of our federal agents. It doesn’t help the Republicans to stop Russia from carpet-bombing of our democratic institutions. So don’t expect  them to repent and show a change of heart anytime soon.