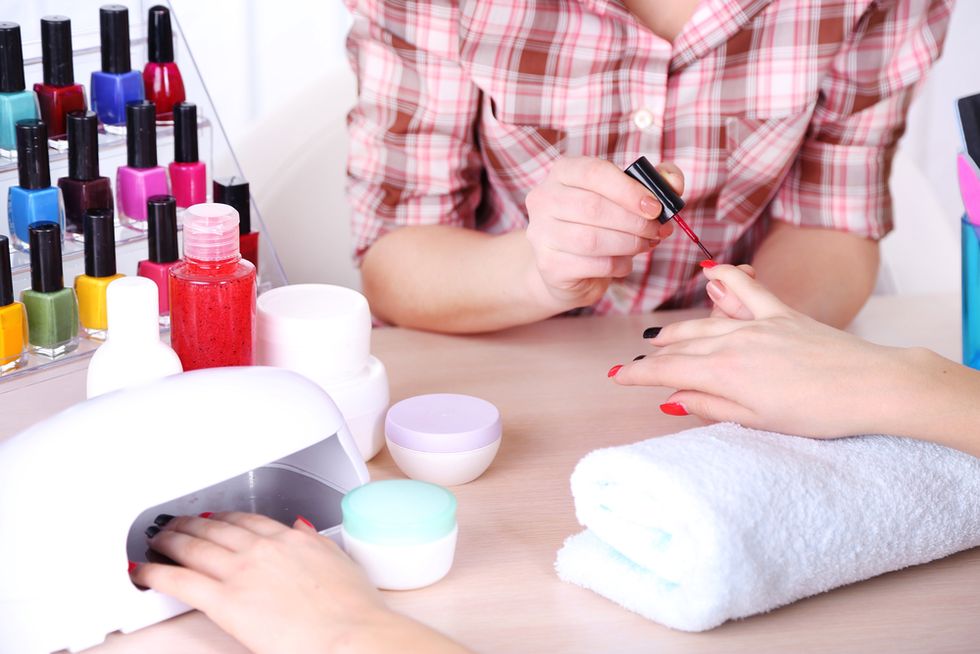 Last fall, I went through an intense body purification that can best be described as a religious experience. Over my nails.

For more than 20 years, I’d had my nails done in a salon on a regular basis. I knew the chemicals were toxic. I knew salons are often havens for human trafficking. I knew the whole process was unhealthy. And yet, I kept going, even when I knew my money could’ve been better spent elsewhere.

At least, I rationalized, my nails looked good and I was supporting small business. I liked picking out my colors, admiring different designs, and cherished the hand and foot massage.

But after that religious experience, the overwhelming epiphany was that I had to stop getting my nails done. Like, it wasn’t even an option not to. I had no choice: I was done with nail polish and nail salons.

So, I took my nail polish off, and I gave up the mani-pedi. Cold turkey.

It wasn’t easy at first. I wasn’t able to make my nails look as pretty as they did walking out of the salon—though that changed with practice. It still takes me more time than the speedy ladies of the nail salon—and I’m skipping most of what they did. Friends told me to just use “organic” nail polish, or “healthy acrylic dips” (which just seems oxymoronic). There are no certified organic nail polishes. Most “organic” ones are really considered “non-toxic” and are just “3-free”—free of three nasty chemicals: toluene, formaldehyde, and dibutyl phthalate, all of which are banned in the EU, and might still pop up in “3-free” products. Never mind the long list of other toxic chemicals that the products still probably include.

You see, the human nail is permeable—and it’s more likely to absorb chemicals than your skin, and nail chemicals are toxic. Headaches and nausea are common in salon workers. Toluene, formaldehyde, dibutyl phthalate, and methacrylate compounds can—alone—cause anything from issues with the nervous system to eye, throat, skin, and lung issues. Toluene and dibutyl phthalate can cause reproductive problems and birth defects. Dibutyl phthalate can also impact memory. Formaldehyde can cause cancer. Together, the cocktail doesn’t sound very appetizing, yet that’s what women are, often, consuming.

But the chemical list doesn’t end with those four. The Environmental Protection Agency has a list of nearly two-dozen hazardous ingredients frequently found in nail salons, along with symptoms of overexposure, and “best practices” for mitigating potential damage. OSHA also has a section on chemical hazards.

Yet consumers spend $8.5 billion annually, and according to NPR, there is little regulation of those chemicals in the nail salons.

In addition, the salon industry is rife with human rights and labor abuses. Several years ago, the New York Times published a stark look at the industry, highlighting some of the abuses: What essentially amounted to slave labor; lack of education; living in squalor. Then there’s the racism of salon owners: “‘Spanish employees,’” reported the Times, are not considered “as smart as Koreans, or as sanitary…”

And while people often think of “human trafficking” as being sexual in nature, women are trafficked for nail salons too, where they are often used as what amounts to slave labor.

Other issues include salons marketing services as “healthy,” while that word seems to be up for different interpretations.

Efforts are being made to improve conditions, at least for the workers. California now has a certification program for “healthy” nail salons that have ventilation systems and make worker protection a priority.

If a salon is certified as “healthy,” my mind still kicks in with questions. I have a deep aversion to putting the stuff on my nails now, let alone every day, week after week, year after year. It looks fabulous, but the system, the chemicals… they’re toxic. Plain and simple. Even if the accepted risk to the consumer is quite low, the risk to the workers, and our society, unborn children, etc., is quite high.

I remind myself of that, and make my nails look pretty, au naturel. Even January 2015 Vogue approves: Less on the nail is more. And it’s always a good time to extract yourself, and your money, from toxic systems, and reinvest in ways that are supportive of a healthier community and world.