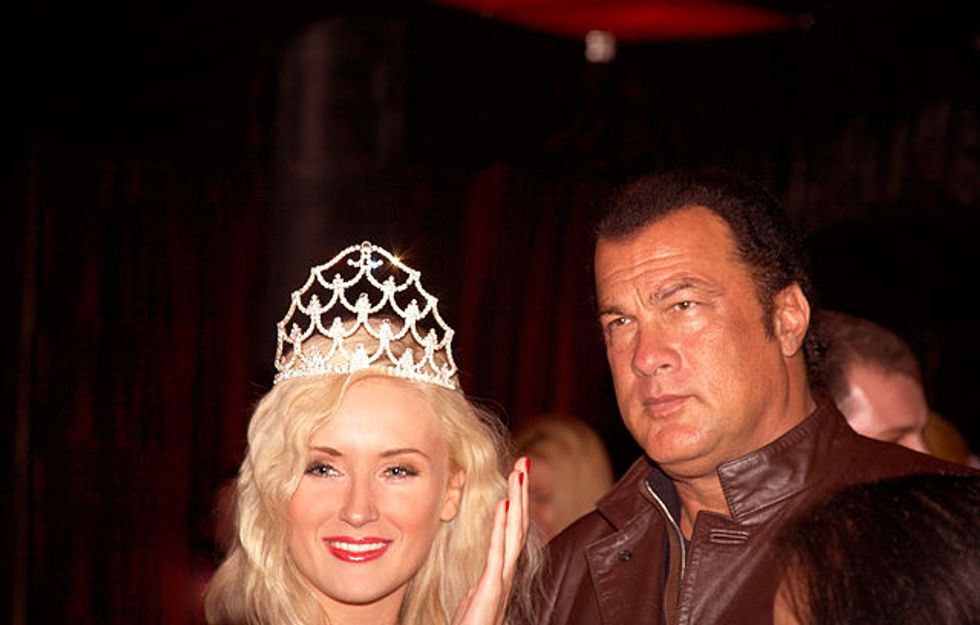 Hopefully there will someday be a filmmaker out there who will tell the story of Steven Seagal, the Hollywood action star who spent his life either acting like or fighting for the villainous characters he beat up in his movies. Considering that he was just appointed to be a special diplomatic envoy to the United States, the tale of his villainy and pathetic lack of self-awareness could have genuine historical significance.

For one thing, here we have an action star who has made several films ("On Deadly Ground," "The Patriot," "Fire Down Below") with pro-environmental moralizing so hamfisted that his fictional characters occasionally come across like sullen, pony-tailed Captain Planet knock-offs. Real Steven Seagal, on the other hand, has politically aligned himself with President Donald Trump, a global warming denier who has single-handedly undermined the world's best effort at fighting man-made climate change and appointed a flagrantly corrupt EPA head that rolled back years of progress in fighting for the environment before resigning in disgrace.

Similarly, Seagal characters were often government operatives who, even if they turned against shadowy establishment figures that betrayed them, never wavered in their loyalty to country and the cause of human freedom. Real-life Seagal, on the other hand, is worse than the Trump supporters who deny the possibility that the president may have betrayed America to Russia for purely partisan or personal reasons. He has actually become close friends with the leader of America's chief geopolitical adversary, Russian dictator Vladimir Putin, who repaid the bromantic love by appointing Seagal to his new position as special diplomatic envoy. Seagal's love of Putin has even gotten him banned from Ukraine . . . which, of course, would never be a problem for the kind of character who fights corrupt Russian oligarchs in "Driven to Kill."

Finally, and most heinously, Seagal has faced a number of accusations of sexual assault and worse. While his cinematic counterparts were doing things like rescuing women and children from sex slavery in films like "Out of Reach," allegations about Seagal himself are harrowing. A number of women have accused Seagal of various acts of sexual misconduct dating back as far as the 1990s, and Los Angeles prosecutors announced last week that they are looking into sex assault accusations against him. As The Washington Post wrote in October:

In fact, Seagal has been accused of similar behavior by too many women to count. He was sued for sexual harassment by another of his assistants in 2001. Multiple women have also accused him of inappropriately asking for or offering sexual massages (sound familiar?), including Blair Robinson, granddaughter of Ray Charles. Robinson was hired as Seagal’s assistant, then quit after her first day when she said it became clear that sexual favors would be part of the job. Another woman accused him of putting his hand down her pants, then refusing to remove it until she screamed. During the filming of Segal’s movie “Out for Justice,” four female staffers quit after alleging sexual harassment, including one “sexual attack.”

I will say this much about Steven Seagal, however: While he is wrong about the negative reports on him being "fake press," he is correct that there is a "political agenda" at work here.

Like the president he serves — the American one, not the Russian — Seagal embodies the ugliest sides of American political and cultural life. Just as Trump is plagued by accusations of sexual misconduct, and yet is put in positions of power despite those claims, so too is Seagal able to keep rising through the ranks regardless of alleged misconduct and abuse. Both men are also completely unqualified for the positions of power that they've obtained: They were washed-up entertainers, not statesmen, with Trump being little more than a male Paris Hilton before being elected president and Seagal having lost the nimble athleticism of his "Under Siege" days. Yet in a culture that can't grasp the fact that fame alone does not endow any wisdom or worthiness, Seagal and Trump have used their bloated masculine images — one as an erstwhile action star, the other as a supposed giant of business — to gain offices they don't deserve.

Finally, and most obnoxiously: Both Seagal and Trump fight for causes that enrich themselves and harm innocent people, even as they hypocritically put on populist airs.

Trump is famous for being a businessman but has filed for multiple business bankruptcies, and while he claims to fight for the working class, his trade policies are hitting target farmers and blue collar workers the hardest. Seagal, meanwhile, presents himself as a deeply spiritual, moral and nature-friendly action star in his movies, yet in real life sells out the environment if doing so will please other frail masculine egos, and exploits the vulnerable instead of protecting them.

It is perhaps fitting that Putin, the master manipulator from the KGB, can see right through these phony exteriors to the potential assets just waiting to be cultivated. I suppose it's for the best that neither Trump nor Seagal produced high art (although I'd watch the worst Seagal movie before the best episode of "The Apprentice"), since at least we're not losing anything valuable in the pop culture realm by seeing the creators exposed as hypocrites.

Nevertheless, it says something sad about American culture that our has-beens can revive their careers if they just sell their souls to a right-wing despot. It doesn't make the figures of Seagal and Trump any less pathetic, but their elevation to political prominence in America reveals that we're not necessarily that much better.