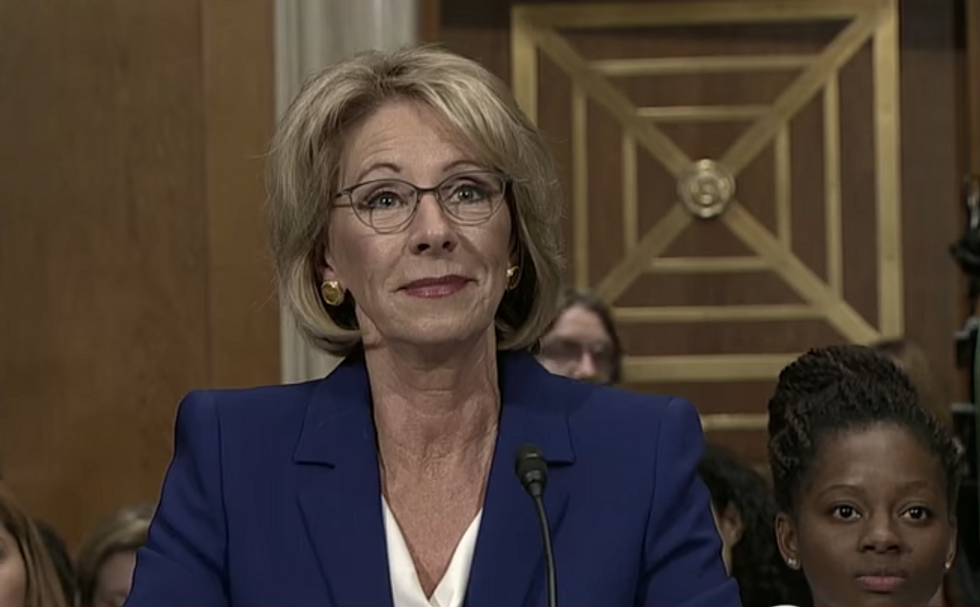 On Wednesday, The New York Times reported that President Donald Trump's Secretary of Education, Betsy DeVos, is considering a significant rollback of federal guidelines for sexual misconduct on college campuses, which would protect the accused and the institutions while limiting recourse for many victims.

The changes would reportedly include redefining sexual misconduct from “unwelcome sexual advances, requests for sexual favors, and other verbal, nonverbal, or physical conduct of a sexual nature," to “unwelcome conduct on the basis of sex that is so severe, pervasive and objectively offensive that it denies a person access to the school’s education program or activity," a considerably more narrow definition.

The changes would also mean colleges and universities would only legally be required to respond to reports if officials have "actual knowledge" and only if the alleged incidents took place directly on campus — incidents involving faculty or students in off-campus housing would be excluded.

Education Department spokeswoman Liz Hill stressed that these leaked details are "premature and speculative" and that none of the changes have been finalized. However, they appear to represent the latest in a pattern of hostility that DeVos' department has shown to the legal rights of victims of sexual incidents.

Early in her tenure, DeVos, a billionaire GOP donor who has no training in either education or civil rights, met to discuss the issue with the National Coalition of Men — an extreme anti-feminist group that routinely attacks rape and domestic violence survivors. And she staffed her department's civil rights division with sexual assault denialists like Candice Jackson, who has claimed that "90 percent" of campus sexual assault cases "fall into the category of 'we were both drunk'."

Last September, DeVos rescinded requirements that colleges and universities use a preponderance standard when investigating sexual assault, and that investigations of complaints be completed within 60 days. She also urged schools to allow accused rapists to interrogate survivors directly, ban survivors from appealing the decisions of administrators, and turn over complaints to law enforcement whether or not the survivor consents to be interrogated by police — all of which would severely discourage survivors from coming forward. DeVos' rollback of civil rights policy was so extreme that many schools simply refused to follow her new guidelines.

Trump himself, who appointed DeVos, has been accused of sexual misconduct by at least 16 women, ranging from accusations of inappropriate touching to assault. He has denied all allegations.