How to Plan an Ecological Water-Harvesting System for Your Home

The following is an excerpt from Gaia's Garden: A Guide to Home-Scale Permaculture, Second Edition by Toby Hemenway. It has been adapted for the Web.

Every home has a handy rainwater collection system built right into it: the roof. Rainwater splashes on rooftops, drips into the gutters, sluices through downspouts, and then goes … away, usually into a storm-drain system. Even in the desert, rainwater usually is treated as a problem to be disposed of, not as the valuable resource it is. I've watched countless acre-feet of rainwater collect on summerbaked parking lots, swirl uselessly down drains, and gurgle toward the ocean, while nearby sprinklers hiss and stutter the last remaining bits of some fossil aquifer onto lawns. Those lawns could easily be watered by that parking-lot catchment system or by rooftop-collected water.

How much water can a roof catch? A lot. The average 2,000-square-foot, two-story house has over 1,000 square feet of roof (most houses plus the garage have far more). If that house is in a region receiving forty inches of rain a year (the average for much of the United States), the roof will collect 25,000 gallons of water each year. That's enough to keep a 1,000-squarefoot garden watered for 250 days of drought.

A 25,000-gallon tank is a little large for the typical backyard, but it's also rarely necessary. In the eastern half of North America, summer rain usually falls every two or three weeks. To drastically reduce municipal or well water use in that part of the country, we only need to store enough to tide us over between rains, or a couple of weeks' worth of irrigation water. How much water is that? A typical garden that covers 1,000 square feet needs roughly 100 gallons per day to thrive (and that's generous water use). Two weeks' worth of water would thus be 1,400 gallons, which would Ã¯Â¬Ât into a circular pond two feet deep and ten feet across, or a tank five feet high and six feet on each side. A pond or tank that size will easily Ã¯Â¬Ât into a typical yard.

We can further shrink the amount of water storage needed, of course, by using water-conserving techniques such as mulches, lots of organic matter, and drip irrigation. I know people who get most of their irrigation water from just four fifty-five-gallon drums, one at each downspout. These drums are easy to camouÃ¯Â¬â€šage with plantings and paint.

Rainless periods can last longer than two or three weeks anywhere on the continent, so for those who truly want to be water-independent, water storage needs to be larger. If you have the space and resources to build a large water tank or pond, then go for it. My point here is simply to show that it's easy to harvest rain, which greatly reduces our dependence on uncertain and energy-consuming water sources.

Compared to Easterners, those in the American West are in tougher shape because rainfall in the West is rarely sufÃ¯Â¬Âcient for gardening. Outside help is essential. Total rainfall on the Great Plains is less than twenty-five inches, not enough for most garden plants. On much of the West Coast a summer stretch of ninety rainless days is common. Water storage in the West simply needs to be larger. The 5,000-gallon rainwater tank in my Oakland yard, sunk in the ground and camouflaged with a deck and grape arbor, took us through only six weeks of drought.

Tanks are utilitarian, but ponds add habitat and visual pleasure to the list of water storage's possible roles. On a hot day the sight of sparkling water edged by lush greenery seems to drop the temperature by ten degrees. Ponds are also cheaper than tanks and can hold far more water if needed.

The secret of storing water in a pond is depth since the smaller surface area needed by a deeper pond to store a given volume means less evaporation. A twelve-by-twelve-foot garden pond that's four feet deep instead of the usual two can store over 4,000 gallons of water. Obviously, if you're pulling water from the pond for irrigation, you will have to develop some strategies for protecting plants and fish when the water level drops toward the bottom. One possibility is to have one pond strictly for irrigation and a second, smaller one for Ã¯Â¬Ânny and leafy inhabitants.

A typical garden pond is lined with flexible plastic and edged with flat rocks. In nature, you'll never see a pond that looks like this -- a tidy opening in the ground rimmed with an even border of flagstones -- and that design creates problems. Birds, small mammals, and many insects can't drink from a pond with such a sheer rock edge. Earle Barnhart, a landscape designer on Cape Cod, has evolved a more natural pond edge, replacing some or all of this abrupt rock drop-off with a gently sloping beach, as shown in Figure 5-5 (below). Small animals can sip at the water's edge in this design. One warning: Larger animals, such as dogs and children, may also be attracted to this backyard beach, with possibly messy results. 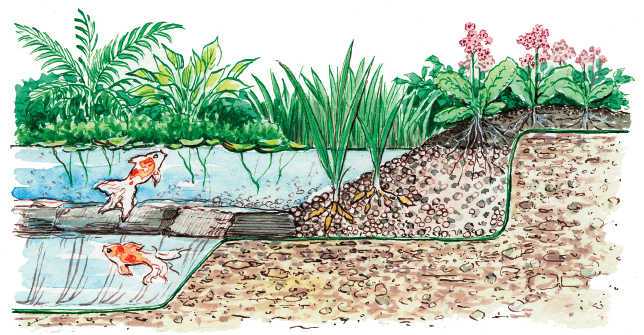 To see how a pond can be both a landscape focal point and a practical water source for the garden, let's look at what forestry consultant and permaculturist Tom Ward did in his Ashland, Oregon, yard. Tom built a 3,000-gallon pond on the uphill side of his vegetable garden. “After we dug the hole for the pond,” Tom told me, “we added three coats of a product called plastic cement, troweled onto bird netting, for reinforcement.” He could have used a rubber or plastic liner but chose a less-expensive but more labor-intensive method since he's got plenty of friends to help him build. The pond is fed by downspouts from the house next door and from a shed in the lot behind Tom's. Both neighbors responded readily to his request for their runoff water.

The pond was new when I visited, but Tom intended to stock it with edible Ã¯Â¬Âsh and a variety of useful and attractive plants. However, the pond's benefits extend beyond its boundaries. A swale runs alongside the pond. OverÃ¯Â¬â€šow dribbles out of the pond, down a rock waterfall, and into the swale. The water is captured by the level swale and sinks into the soil. Tom's vegetable garden is just downhill from the swale, and the expanding lens of subterranean wetness from the swale moves down the slope toward the crops like a slow underground tide. The pond and swale thus form a subsurface irrigation system for the nearby garden. Once again, placing the pieces in the right relationship lets nature do the work and substantially cuts Tom's reliance on municipal water.

At the outlet end of the swale, about twenty feet from the waterfall inlet, Tom planted blueberry bushes. Any water that flows the entire length of the swale and spills out the far end is captured by these shrubs.

This is a Ã¯Â¬Âne example of ecological design. The pond harvests rainfall from his neighbors' roofs, the swale collects any surplus from the pond, and the garden and blueberries beneÃ¯Â¬Ât from moisture taken in by the swale. Tom has integrated a pond into his garden that is attractive and practical and that connects once-separate elements -- even from beyond his own property -- into a healthy, smoothly functioning whole.